The Sultan of Brunei's has been in power since 1967, and has amassed a huge amount of wealth in that time - and he's not afraid to spend it on extravagant items, either.

Hassanal Bolkiah ibni Omar Ali Saifuddien III – or the Sultan of Brunei as he's known to his mates – is thought to have an astonishing net worth of around £30billion. And he's not afraid to splash the cash.

The Sultan came to power on October 5, 1967, taking over from Omar Ali Saifuddien to become the 29th ruler of the country. The 75-year-old is also the Prime Minister, Minister of Defence and Minister of Foreign Affairs, too. So it's no wonder that he has amassed an extraordinary large amount of wealth, which goes with his extraordinarily large full title. If you're wondering, it's Sultan Haji Hassanal Bolkiah Mu’izzaddin Waddaulah ibni Al-Marhum Sultan Haji Omar ‘Ali Saifuddien Sa’adul Khairi Waddien, Sultan and Yang Di-Pertuan of Brunei Darussalam. 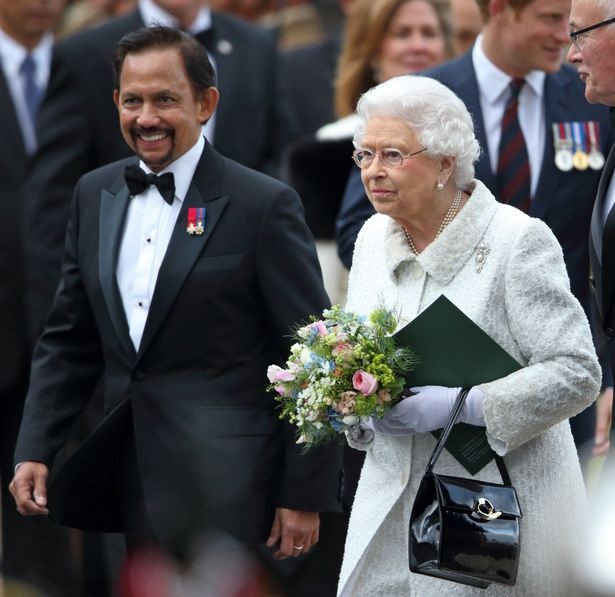 But back to his wealth, he has so much money that he once spent around £15,000 on a haircut. Gold-plated private jets are of course part of his stock of extravagant items owned.

The Boeing 747 aircraft, worth around £350million, has a gold washbasin, gold-lined windows and tables, leather seats and another £100m's worth of additions inside. Several reports claims that he has 7,000 luxury cars.

Where he stores them is unknown, although some reports indicate that he actually rents them out to car collectors to provide further income. It was rumoured that he owned more than half of all Ferraris sold between 1990 and 2000. Anyone who can afford that many cars, has to have a ridiculously expensive home. And he does.

The Istana Nurul Iman Palace was built in 1984. It spans a whopping two million square feet, and is the largest place in the world, according to the Guinness Book of World Records. It comes complete with a 22-carat gold dome, 1,700 rooms, five huge swimming pools and 257 bathrooms – because he clearly likes variety when he needs the loo.

It also has 110 garages, which could explain where he stores his incredible fleet of cars. Strangely, someone calculated that it has 564 chandeliers which need 51,000 light bulbs to make work.

As is expected of any wealthy leader, he has his own private zoo containing 30 Bengal tigers, several falcons and a myriad of flamingos and cockatoos.

The palace is not open to the public, but is used for important state functions and specific Muslim holidays when around 110,000 people will come during the eid-ul-Fitr festival. It is valued at around £1.3billion, but will likely never hit the open market.

Group of fired Twitter employees sues Twitter and Elon Musk...
Canelo grabbed me, I wanted to defend Messi Santiago Gimenez appears on social networks with a black eye...
Chiquis Rivera impresses wearing a tight transparent mesh jumpsuit...
Mexico, the third team that ran the least and the fourth with the least effectiveness in the Qatar 2022 World Cup...
Eiza Gonzalez dazzles when wearing a set of miniskirt and top with metal plates...
In the pool, Belinda comes out of the water and shows off her rear guard to the fullest wearing a microbikini...
Niurka Marcos exposed her shapely attributes while exercising in a white mini bikini...
Aislinn Derbez shows off her natural beauty posing in lingerie and they say “she never stops humiliating us”...
Akon causes controversy by giving his opinion about Kanye West's recent statements...
Ninel Conde shows off her heart-stopping curves while posing with a translucent bodysuit...
The three historical records left by Lionel Messi in Argentina's victory over Australia...
Giant wave breaks the windows of a cabin and causes the death of an American woman on an Antarctic cruise...
Cazzu confesses that she is uncomfortable with the controversy generated by her romance with Christian Nodal...
Ivonne Montero reveals how she burned her eyes and ended up in the hospital...
Cynthia Rodriguez, wife of Carlos Rivera, shows off a mini waist while posing in a bikini from a yacht...
Carolina Sandoval shows off the most intimate corners of her new home on a house tour...