Demi Rose has put on yet another red hot social media display as she went naked under a slew of diamantes.

The model's Instagram is littered with snaps of the star wearing racy outfits and this time, she took to her Instagram Stories and shared a video of herself wearing a barely-there bedazzled number.

Demi, 27, made sure to make eyes at the camera before fully flaunting her jaw-dropping curves in the sultry display.

Tilting the camera so fans could get a good look, the OnlyFans star almost spilled out of the diamante covered garment which could barely contain her assets.

The influencer went completely naked under the jewel-embellished ensemble which just about covered her modesty, matching the skimpy number with a pair of grey suede cowgirl boots.

She highlighted her stunning features with a glam palette of make-up including her signature winged eye-liner and let her brunette tresses fall down her back in loose curls. 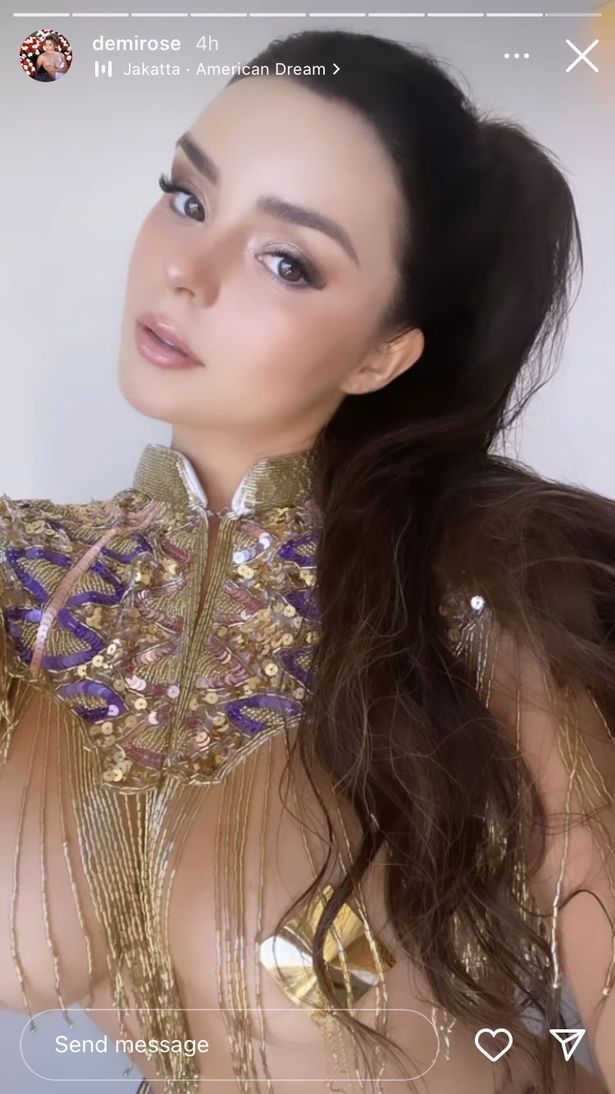 Several hours later, the star took to her Instagram stories once again to give fans a different look at the see-through ensemble.

Standing with her back to the camera, the Birmingham native risked a wardrobe malfunction as she unleashed her killer curves and peachy behind in the risqué dress.

It seems Demi, who has previously dated Kylie Jenner’s ex-boyfriend Tyga, has found her new favourite style as just a few days ago, she took to Instagram wearing nothing but a jewel-covered neck harness.

Once again, she risked putting more on show than she bargained for as she appeared completely naked aside from the harness, which clasped at her throat and was covered in gold and purple jewels.

The collar worked its way down her chest and fell away into delicate gold tassels that covered her breasts.

To protect her modesty - and avoid a ban from Instagram - the influencer wore a gold nipple cover.